We are a Community Convener for Data Innovation

Our Vision is to mobilize the Southern data science community to collectively accelerate scientific discovery and innovation, spur economic development in the region, broaden participation and diversity in data science, and address societal challenges affecting the Southern United States.

At this moment, businesses, researchers, governments, and individuals are creating digital data at an unprecedented pace. However, the great challenge is how to harness these large, complex data sets and research findings into economic growth and positive impacts for people and communities.

The South Hub builds the necessary bridges and acts as a community convener, collaboration hub, and catalyst for data science innovation, through education, funding support, and collective action. The Hub also amplifies the successes of the community, provides programs and funding, as well as shares credit across the community to encourage collaboration and mutual success toward shared Goals and Priority Areas

The South Hub serves the Southern U.S. Census Region (i.e. 16 States: Delaware - Texas, including Washington DC, Puerto Rico, the U.S. Virgin Islands, and territories). It is part of a network of four regional Big Data Hubs, launched by the National Science Foundation including the Midwest, Northeast, and West Big Data Hubs, to engage local or regional stakeholders, e.g., city, county, and state governments, local industry, and nonprofits, and regional academic institutions, in big data research, and permit a focus on regional issues. The Hubs are funded in part by host universities and other partners.

The South Big Data Innovation Hub is managed jointly by the Georgia Institute of Technology and the University of North Carolina at Chapel Hill, the South Hub provides critical infrastructure for the transition of Big Data to Benefits—with more than 1300+ members from universities, corporations, foundations, and cities committing their support.

We Actively Reduce the Barriers to Data Innovation at Scale

Our nation faces tremendous societal and economic challenges. For Data Innovation to benefit society at large and address some of these challenges large-scale collaborations are essential. , There are, however, four primary friction points that hamper the success of regional, national, or international collaborations around data.

As such our goals, objectives, and programs are organized around lowering these barriers to innovation by building bridges and expanding opportunities across sectors through our four pillars: Advancing Data Science Education, Infrastructure, Engagement, and Partnership. 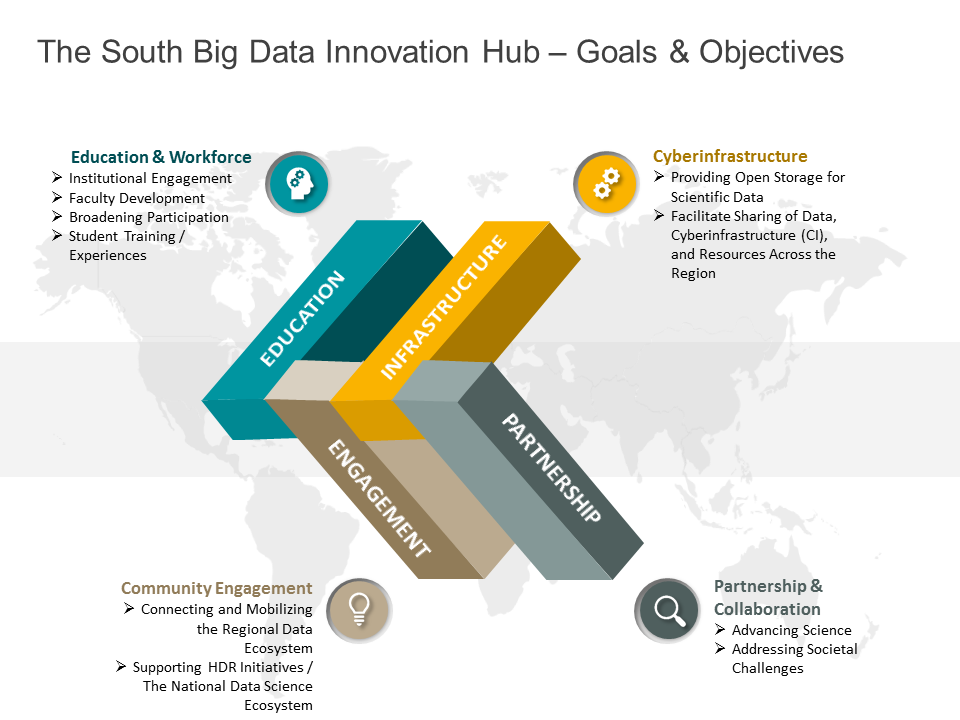 The South Hub delivers impact through four pillars which promote  1.) data science education, working with educators to increase their skills and disseminate best practices 2.) data sharing & cyberinfrastructure for science, raising the visibility of high impact datasets and cyberinfrastructure to increase efficient use of resources and efficiency of federal funding 3.) community engagement, to mobilize the regional community to work across institutions, disciplines, and sectors as well as 4.) partnership, building partnerships with and between existing data science centers and supporting new collaborative projects to advance science or address societal challenges. South BD Hub programs align deeply with these pillars and serve to strengthen the collective data science ecosystem in the South.

We Serve the Data Science Ecosystem

Learn more about the strong impact of the South Hub on the advancement of research and development across the region.

Learn more about the opportunities provided to students to gain real-world experiences through fellowships, collaborations, expertise sharing, internships, and travel awards to expand their knowledge and network.

Learn more about the opportunities industry partners may access and utilize to harness the expertise and research skills of faculty and graduate student data scientists.

The Southern Region and Non-Profit Communities

Learn how the South Hub pursues community input to create positive impacts on people and their communities that have led to the development of inclusive programming, expansion of data science education, and society improving projects.

Our History:  The South Big Data Innovation Hub is one of only four Data Innovation Hubs in the nation, and covers over 125 million people spanning 16 states i.e. Delaware to Texas as well as the US Virgin Islands, and Puerto Rico. Seeded by the NSF, the South Hub now operates with over 130 different partners and a mix of members from academia, industry, government, and non-profit agencies.

In 2015, the National Science Foundation established The Big Data Innovation Hubs to take a leadership role in the creation of coordination mechanisms for data innovation between industry, academia, and government and to catalyze the use of Big Data to benefit social, economic, and research challenges in the United States.

Why We Do It

We See Pressing Needs that Data Innovation Can Help Solve

While some challenges are widespread, like Data Science education or data sharing; many others are unique to the South. For example, the South region faces vast disparities in the health of its citizens and access to healthcare resources; indeed, the South has the highest rates of obesity and poverty in the nation, infectious disease transmission of HIV, cardiac risk, and stroke. Coupled with a rural infrastructure with minimal healthcare resources these pandemics and social determinants heavily affect the region and its citizens. View some of our partners work using data visualization, community, and public policy to See an End to the Southern HIV Epidemic.

Also, the coastal region of the South covers most of the East Coast and the Gulf Coast and is associated with a disproportionate share of natural hazards such as hurricanes and flooding, as well as the secondary societal and economic consequences that those hazards present. See a South Hub Spoke project on 3D mapping the Gulf Coast for flood and hazard prediction. On a local level, these challenges could compound, particularly as changes in the climate affect local conditions.  View our Spoke project software VERA, using Artificial Intelligence to aid citizen ecologists to model personalized climate change on a local level.

Third, regions of the South are growing rapidly, which brings an urgent need for careful smart city and rural planning to maximize sustainability, as well as societal and economic gain, while minimizing environmental as well as social impact. Lastly, the Southern region contains several industrial materials and manufacturing “hot spots”, which present both challenges and opportunities, in terms of logistics, transportation, and supply chain management to support economic growth in the region.

At The South Big Data Innovation Hub, we use our four pillars to reduce the barriers to data innovation at scale, strengthening the data science ecosystem overall for the future and building collective impact in critical priority areas important for the South and the World.

Renata Rawlings-Goss, Ph.D., is the Executive Director of the South Big Data Innovation Hub and oversees the strategic direction of the South Hub including its programs, operations, and    staff. She is also the Director of Strategic Partnerships for the Georgia Institute of Technology- Institute for Data Engineering and Science.  Formerly, Dr. Rawlings-Goss worked with the White House Office of Science and Technology Policy to create the National Data Science Organizers Group, which facilitates data science groups to address national “Grand Challenge” problems. She also sat on the NITRD interagency Big Data Senior Steering group charged with strategic planning for big data research funded by the federal government. She was awarded as an founding AAAS Big Data Science and Technology Fellow to work with the National Science Foundation (NSF) in the directorate of Computer and Information Science and Engineering (CISE-OAD)  on the big data research program, as well as data science  policies and priority goals for the foundation. Rawlings-Goss is a biophysicist by training, and her research interests include data-driven analysis of genetic/expression variation among worldwide human populations.

Shannon McKeen has a strong background in consulting in senior management roles for companies restructuring in the textiles space. He is an instructor in Kenan-Flagler’s online MBA program and in the undergraduate business program at Wake Forest. McKeen has 20 years of executive experience in sales, marketing, and general management, with extensive expertise in growth strategies, new products, and brand rejuvenation. As an entrepreneur, McKeen has worked with startup companies and with new divisions of larger companies. His work has included starting ecommerce sites in the U.S. and China and raising capital for medical products companies. He serves on the Fryeburg Academy Board of Trustees and the City of Winston-Salem Budget Advisory Council. He is a member of the National Association of Corporate Directors and the North Carolina Inception Micro Angel Fund.

Srinivas Aluru, Ph.D, is a Principal Investigator of the South Big Data Hub, the Executive Director of the Georgia Tech Interdisciplinary Research Institute (IRI) in Data Engineering and Science (IDEaS), a professor in the School of Computational Science and Engineering within the College of Computing, and an adjunct professor in the school of Electrical and Computer Engineering at the Georgia Institute of Technology. Aluru conducts research in high performance computing, large-scale data analysis, bioinformatics and systems biology, combinatorial scientific computing, and applied algorithms. He pioneered the development of parallel methods in bioinformatics and systems biology and contributed to the assembly of genomes and metagenomes, next-generation sequencing bioinformatics, and gene network inference and analysis. His contributions in scientific computing lie in parallel fast multipole methods, domain decomposition methods, spatial data structures, and applications in computational electromagnetics and materials informatics.

Stan Ahalt, Ph.D., is the Director of the Renaissance Computing Institute (RENCI) at UNC-Chapel Hill. As director, he leads a team of research scientists, software and network engineers, data science specialists, and visualization experts who work closely with faculty research teams at UNC-CH, Duke, and NC State as well as with partners across the country. RENCI’s role is to provide enabling cyberinfrastructure to these research collaborations, which entails working on the challenges of data management, sharing, integration, and security. Ahalt is also a professor in the UNC-CH Computer Science Department and the Associate Director of the Informatics and Data Science (IDSci) Service in the North Carolina Translational and Clinical Sciences Institute (NC TraCS), UNC’s CTSA award. Ahalt earned his doctorate in Electrical and Computer Engineering from Clemson University and has over 30 years of experience in high performance computing, signal processing, and pattern recognition.