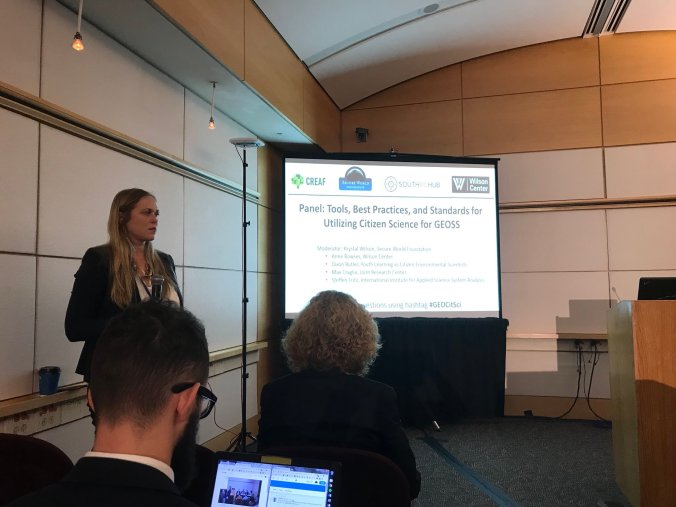 In the last decade, citizen science and projects based on knowledge generated from volunteers and non-experts have increased dramatically. A number of initiatives involve citizens in environmental monitoring and stewardship supported by Earth observation-enabled applications. Citizen observations and data can complement data collected by more traditional methods and can be used for validation and calibration of research data and methods and to fill existing gaps in data.

The South Big Data Innovation Hub, with co-sponsors Secure World Foundation (SWF), the Center for Ecological Research and Forestry (CREAF), and the Wilson Center, hosted a workshop this past fall titled, “The Role of Citizen Observatories and Crowdsourcing Community in GEOSS” in conjunction with the international Group on Earth Observations’ (GEO) annual meeting (see GEO-XIV Plenary).

The event featured lightning talks highlighting the opportunities and impacts of citizen science programs and observatories in Europe and the U.S. It also brought together a panel of international government and industry experts to share their thoughts on the tools, best practices and standards for utilizing citizen science to augment and enhance the Global Earth Observation System of Systems (GEOSS). The event concluded with discussions to determine the next steps to advance the objectives of the GEO work programme.

If you missed the citizen science workshop or want to review the content that was presented there, SWF has posted thea workshop agenda, video and links to the slides of presenters. Presentations include a series of lightning talks on citizen science programs and observatories as well as a panel discussion on tools, best practices, and standards for citizen science in the geosciences.